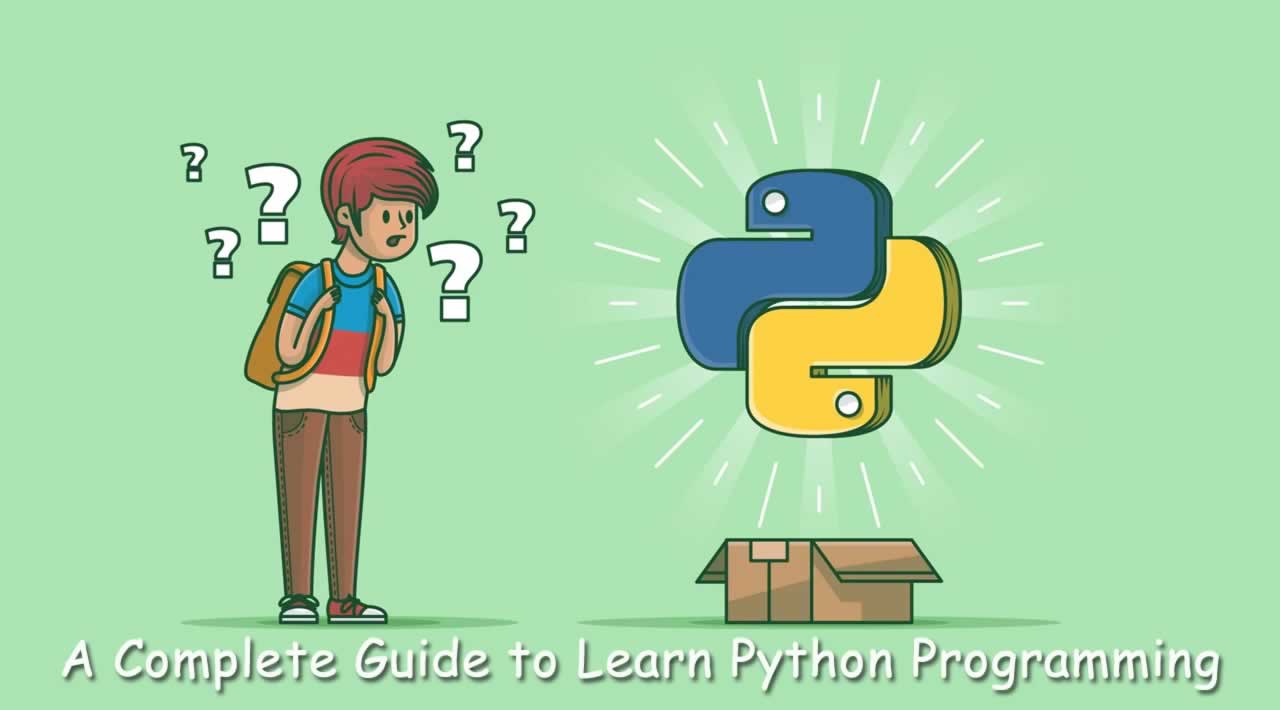 Python is a high-level, object-oriented, interpreted programming language, which has garnered worldwide attention. Stack Overflow found out that 38.8% of its users mainly use Python for their projects. According to the website’s survey, Python’s popularity surpassed that of C# in 2018 – just like it surpassed PHP in 2017. On the GitHub platform, Python surpassed Java as the second-most used programming language, with 40% more pull requests opened in 2017 than in 2016. In this Python Tutorial, I will be discussing the following topics:

But, what I mean by interpreted language, let’s understand what is an interpreter first.

An interpreter is a computer program that directly executes, i.e. performs, instructions written in a programming or scripting language, without requiring them previously to have been compiled into a machine language program. So unlike Java, Python uses an interpreter.

Following are the steps to install Python

2. Select the Operating System and also the version of Python. I am downloading 3.6.0 in my windows machine. Open the installer and click on “Run”.

4. Start IDLE which is a Python GUI and start scripting.

I don’t prefer using IDLE for coding in Python, instead, I will download PyCharm which is an IDE (Integrated Development Environment). It will only be fair if I explain to you what is an IDE before I proceed with this Python tutorial blog.

IDE typically provides code editor, compiler/ interpreter and debugger in one GUI (Graphical User Interface). It encapsulates the entire process of code creation, compilation and testing which increases the productivity of developers.

A developer working with an IDE starts with a model, which the IDE translates into suitable code. The IDE then debugs and tests the model-driven code, with a high level of automation. Once the build is successful and properly tested, it can be deployed for further testing through the IDE or other tools outside of the IDE.

I am going to use PyCharm, you can use any other IDE that you want.

Now, let us have a look at why one should even consider Python as a preferred or first programming language.

Python’s syntax is very easy to understand. The lines of code required for a task is less compared to other languages. Let me give you an example – If I have to print “Welcome To Mmorioh!” all I have to type:

Let’s look at some cool features of Python:

If you are wondering where you can use Python (Python Application), let me tell you that is where Python stands out.

Let us now start coding in Python, as I have mentioned above I will be using PyCharm.

Variables are nothing but reserved memory locations to store values. This means that when you create a variable you reserve some space in memory.

Fig: The figure above shows three variables A, B and C

In Python you don’t need to declare variables before using it, unlike other languages like Java, C etc.

Assigning values to a variable:

Python variables do not need explicit declaration to reserve memory space. The declaration happens automatically when you assign a value to a variable. The equal sign (=) is used to assign values to variables. Consider the below example:

This will assign value ‘10’ to the variable ‘S’ and will print it. Try it yourself.

Python supports various data types, these data types defines the operations possible on the variables and the storage method. Below is the list of standard data types available in Python:

Let’s discuss each of these in detail. In this Python tutorial, we’ll start with ‘Numeric’ data type.

Integer type: It holds all the integer values i.e. all the positive and negative whole numbers, example – 10.

Complex type: These are of the form a + bj, where a and b are floats and J represents the square root of -1 (which is an imaginary number), example – 10+6j.

Now you can even perform type conversion. For example, you can convert the integer value to a float value and vice-versa. Consider the example below:

The code above will convert an integer value to a float type. Similarly you can convert a float value to integer type:

Now let’s understand what exactly are lists in this Python Tutorial.

Notice that the Subjects List contains both words as well as numbers. Now, let’s perform some operations on our Subjects List.

Let’s look at few operations that you can perform with Lists: 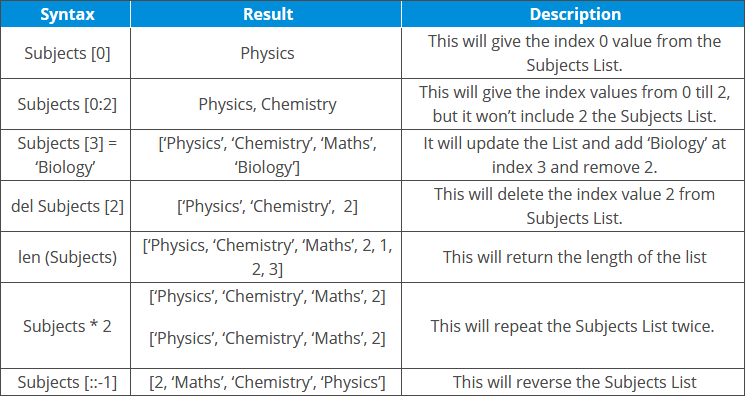 Next in Python Tutorial, let’s focus on Tuples.

A Tuple is a sequence of immutable Python objects. Tuples are sequences, just like Lists. The differences between tuples and lists are:

Now you must be thinking why Tuples when we have Lists?

So the simple answer would be, Tuples are faster than Lists. If you’re defining a constant set of values which you just want to iterate, then use Tuple instead of a List.

Guys, all Tuple operations are similar to Lists, but you cannot update, delete or add an element to a Tuple.

Now, stop being lazy and don’t expect me to show all those operations, try it yourself.

Strings are amongst the most popular data types in Python. We can create them simply by enclosing characters in quotes. Python treats single and double quotes in exactly the same fashion. Consider the example below:

Let’s look at few operations that you can perform with Strings.

I hope you have enjoyed the read till now. Next up, in this Python tutorial we will focus on Set.

In Sets, every element has to be unique. Try printing the below code:

Here 3 is repeated twice, but it will print it only once.

Let’s look at some Set operations:

Union of A and B is a set of all the elements from both sets. Union is performed using | operator. Consider the below example: 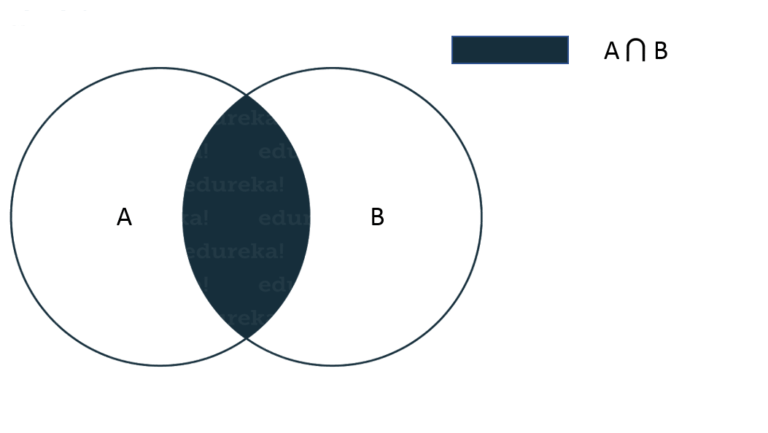 Intersection of A and B is a set of elements that are common in both sets. Intersection is performed using & operator. Consider the example below: 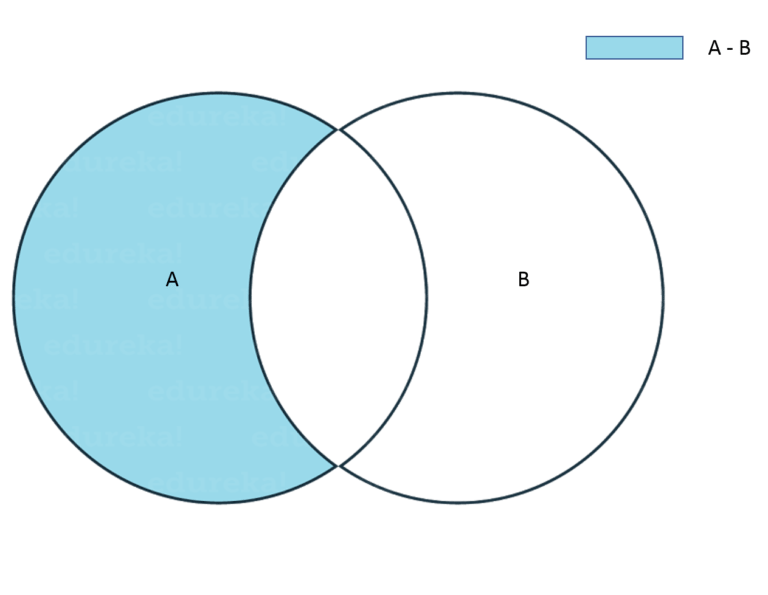 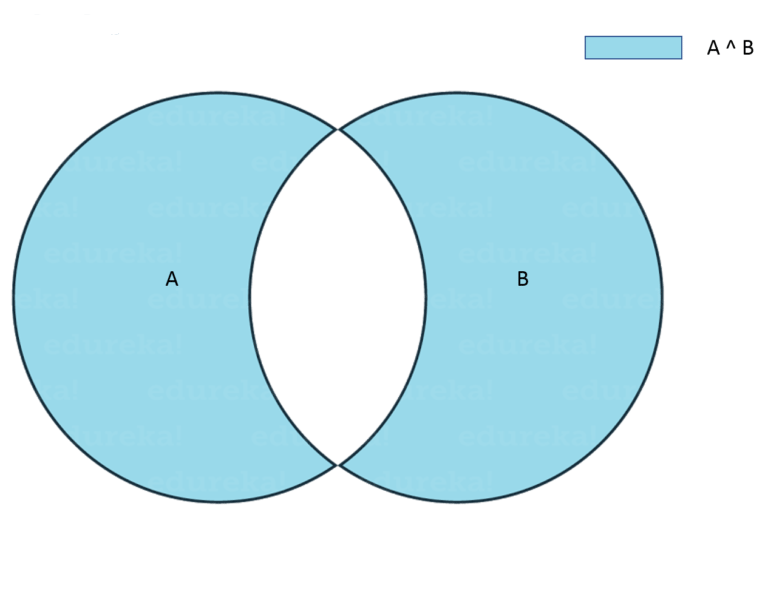 Symmetric Difference of A and B is a set of elements in both A and B except those that are common in both. Symmetric difference is performed using ^ operator. Consider the example below:

Next in Python Tutorial, it’s the time to focus on the last Data type i.e. Dictionary

Now let me explain you Dictionaries with an example.

I am guessing you guys know about Adhaar Card. For those of you who don’t know what it is, it is nothing but a unique ID which has been given to all Indian citizen. So for every Adhaar number, there is a name and few other details attached.

Now you can consider the Adhaar number as a ‘Key’ and the person’s detail as the ‘Value’ attached to that Key.

Dictionaries contains these ‘Key Value’ pairs enclosed within curly braces and Keys and values are separated with ‘:’. Consider the below example:

Next in Python Tutorial, let’s understand the various Operators in Python.

Operators are the constructs which can manipulate the values of the operands. Consider the expression 2 + 3 = 5, here 2 and 3 are operands and + is called operator. 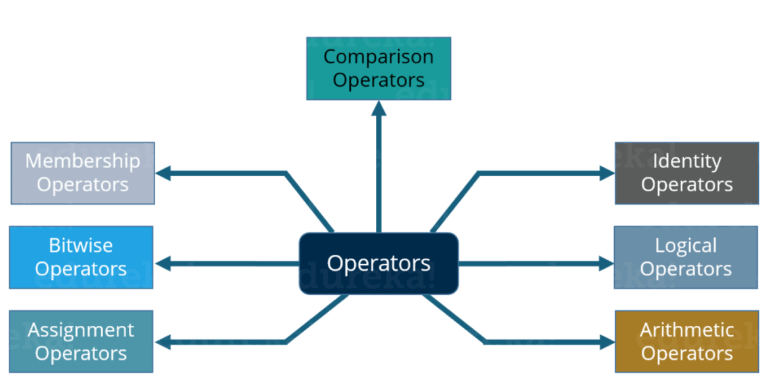 Let’s focus on each of these Operators one by one.

These Operators are used to perform mathematical operations like addition, subtraction etc. Assume that A = 10 and B = 20 for the below table.

These Operators compare the values on either sides of them and decide the relation among them. Assume A = 10 and B = 20. 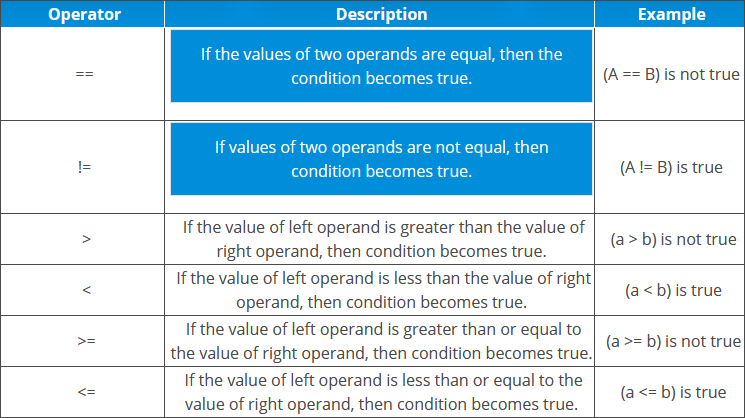 An Assignment Operator is the operator used to assign a new value to a variable. Assume A = 10 and B = 20 for the below table. 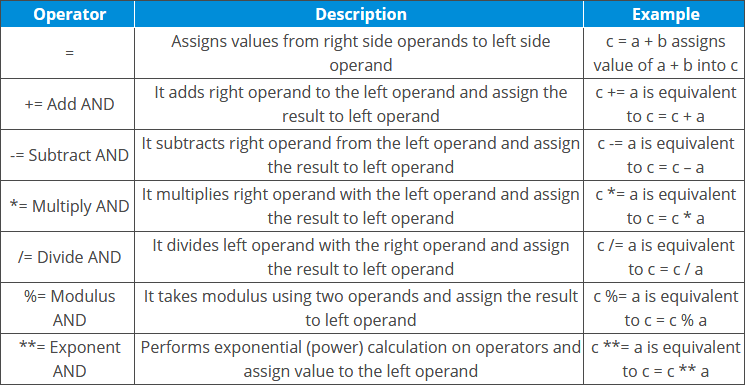 These operations directly manipulate bits. In all computers, numbers are represented with bits, a series of zeros and ones. In fact, pretty much everything in a computer is represented by bits. Consider the example shown below: 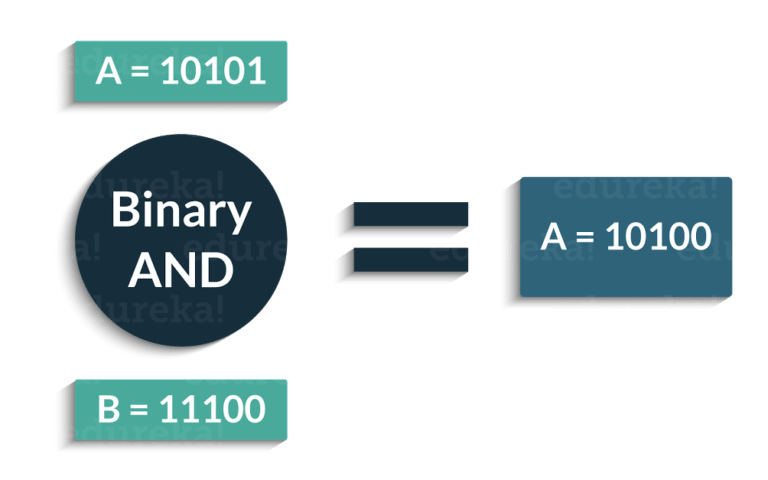 Following are the Bitwise Operators supported by Python: 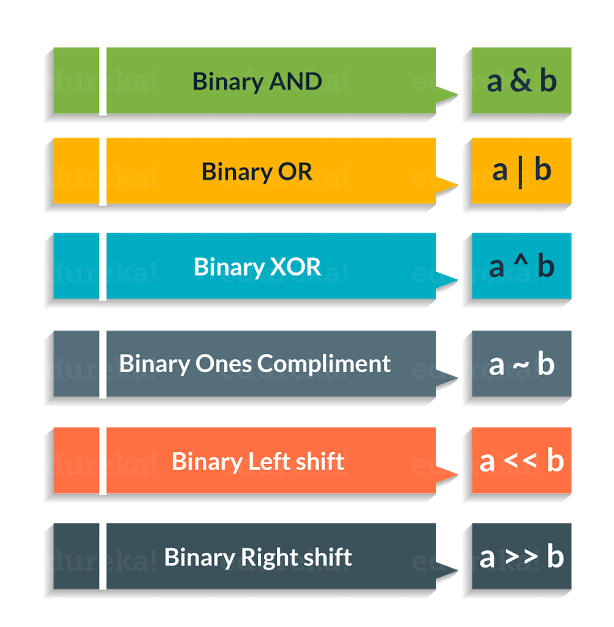 Next up, in this Python Tutorial we will focus on Logical Operators.

The following are the Logical Operators present in Python:

These Operators are used to test whether a value or a variable is found in a sequence (Lists, Tuples, Sets, Strings, Dictionaries) or not. The following are the Membership Operators:

These Operators are used to check if two values (or variables) are located on the same part of the memory. Two variables that are equal does not imply that they are identical.

Following are the Identity Operators in Python:

I hope you have enjoyed the read till now. Next in Python Tutorial, let’s look at various Conditional Statements.

Consider the flowchart shown below: 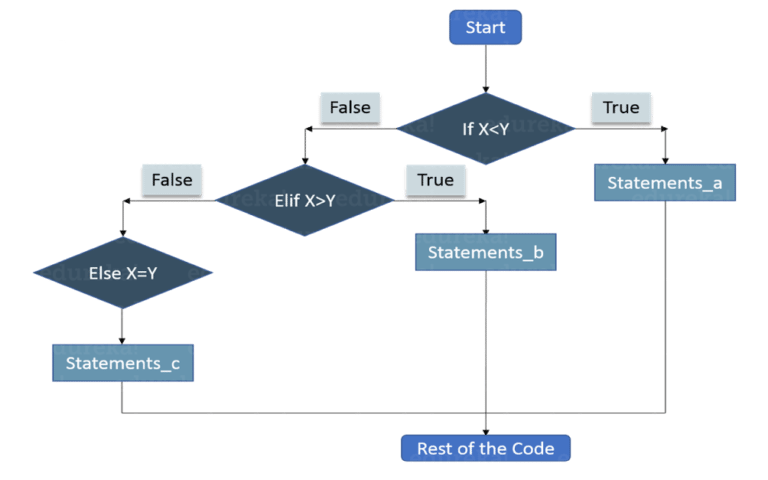 Let me tell you how it actually works.

Below is the syntax:

Output = X is less than Y

Now is the time to understand Loops. 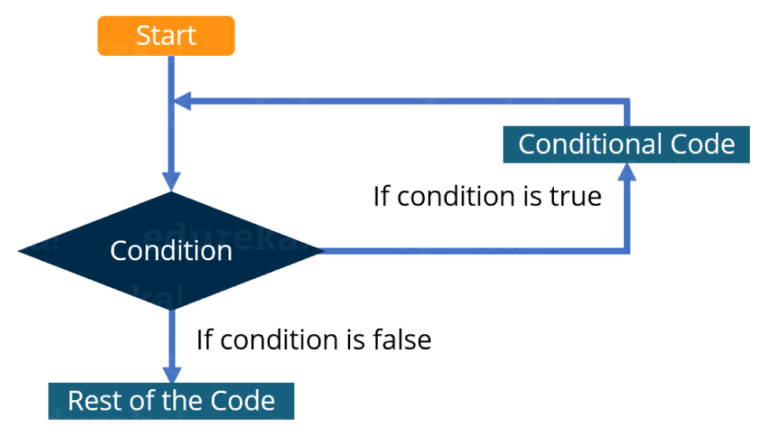 Let me explain you the above diagram:

There are two types of loops:

There is one more way to categorize loops:

Python does not support Post-test loops.

In Python, there are three loops:

For Loop: Like the While loop, the For loop also allows a code block to be repeated certain number of times. The difference is, in For loop we know the amount of iterations required unlike While loop, where iterations depends on the condition. You will get a better idea about the difference between the two by looking at the syntax:

Notice here, we have specified the range, that means we know the number of times the code block will be executed.

Now is the best time to introduce functions in this Python Tutorial.

Functions are a convenient way to divide your code into useful blocks, allowing us to order our code, make it more readable, reuse it and save some time. 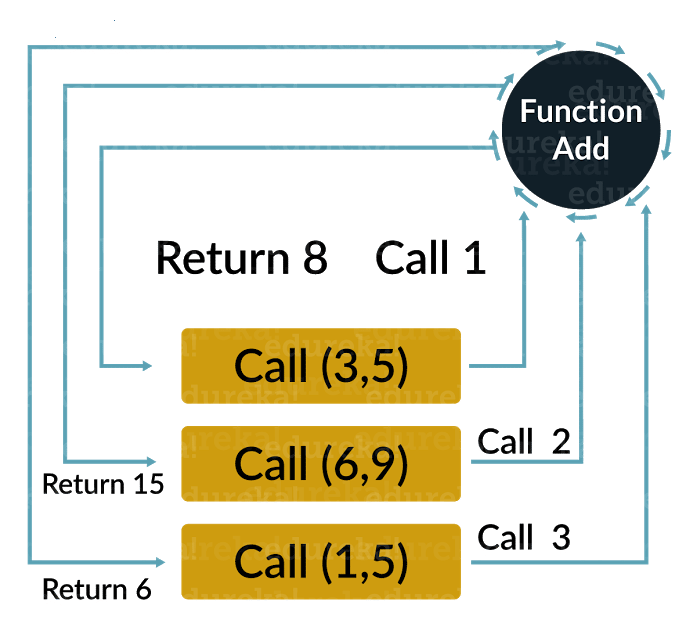 How To Open A File Using Python?

Python has a built-in function open(), top open a file. This function returns a file object, also called a handle, as it is used to read or modify the file accordingly.

We can specify the mode while opening a file. In the mode, we specify whether we want to

The default is reading in text mode. In this mode, we get strings when reading from the file.

How To Close A File Using Python?

When we are done with operations to the file, we need to properly close the file.

Closing a file will free up the resources that were tied with the file and is done using Python close() method.